So-called genotoxic stresses (UV, viral infections, chemical agents) can induce DNA damage such as breaks in the DNA strand. In response to these lesions, DNA repair systems help maintain the physical or functional integrity of the genomes so that these abnormalities, which compromise the genetic integrity of the individual, are not passed on to future generations.
The FBL17 protein, an F-box protein associated with selective protein degradation mechanisms, was known for its key role in the progression of the cell cycle. By showing the recruitment of FBL17 at the very site of DNA breakage, this study reveals its direct involvement in the mechanisms of repair of DNA damage. This work highlights the regulation by selective proteasome-dependent degradation of proteins involved in the response to DNA damage. 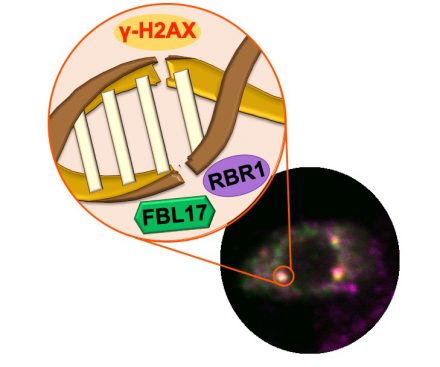 The  gamma-H2AX marker reveals double-strand breaks in DNA. RBR1 is also a key regulator of the cell cycle. FBL17 co-locates with RBR1 at the site of DNA damage at the level of so-called nuclear foci structures.

This study was published in Plant Physiology on May 15, 2020.